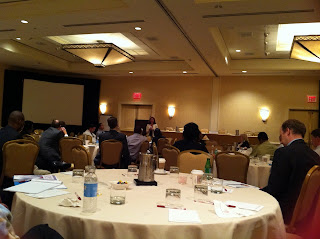 PAICR delegates reacted with complete calm. The "after" picture would have looked the same with one big difference - everyone had their phones in ther hand checking twitter for what the hell just happened.

According to nearby tweets some New Yorkers evacuated their buildings.

Maybe so, but we sat tight. There were few native New Yorkers in the room, meaning most had plenty of personal experience from elsewhere in the U.S. of earthquakes.

Regardless, no one was really sure what the trembling tables, clinking glasses and shuddering floor actually meant, in the moment.

Personally I was eyeing the doorways, wondering how many conference goers might fit in each. Not many, the simple mental math suggested.

And then it crossed my mind, as I suspect it did others, for just a moment, that perhaps this wasn't an earthquake but something more frightening.

And at about that point everyone reacted. Some headed for the doorways, others reached for their iPhones or Backberries and some, like me, turned to the person next to them to see if they were thinking the same thing: minor earthquake.

Yes, the earthquake-experienced said, that sure felt like one. But no-one, least of all the conference organisers or asset consultant panel, actually knew. It clearly wasn't a subway-scale shake we'd just felt.

So where did everyone go for the actual answer? Twitter. Email. Google.

And in that lies the answer to an earlier question in the panel session I and others presented on social media.

The question was this: what possible use is twitter for an institutional asset management audience?

And the answer? As an immediate response to news events. With markets making headlines, and news media not alwways able to report the whole story, we're increasingly looking to information (such as twitter) that is direct from the source - and actually bypasses traditional media.

Just as the first reports about today's eathquake did. The Mashable coverage below is a good example of how citizen journalism, or direct reports leave traditional media for dead, in the moment.

The implications for brands are clear: social media gives you a golden opportunity to speak direct to audiences who matter most, WHEN it matters most. In the moment.