Communicating to SMSFs and their advisers and accountants

Media, word of mouth the new drivers of SMSF creation

Day 2 of the FSC Conference (#FSC13) and I find myself bouncing between the major issues sessions on super and insurance, while my colleagues (@BlueChip_Comm and @madd_23n) attend the advice sessions.

The super session right now is all about SMSFs. In another first for the FSC this session was the first of its kind to focus on the fastest growing segment of our national superannuation savings.

The speakers are @ASlattery_SPAA, Recep Parker of Investment Trends and Michael Chaaya from Corrs Chambers Westgarth.

It was Recep's comments that, cheerily delivered, had my full attention. The mode of delivery helped but it was the content that really had me - and should attract the attention of anyone wanting to communicate to, or market to, SMSF trustees, their accountants or their advisers.

Why they do what they do
As we all know, the primary driver for those who want an SMSF is control. SMSF trustees become trustees because they get their statement, see poor performance, look at fees & reach the (not unreasonable) conclusion that they can make better investment decisions than the professional investment managers.

Control may be a primary driver but when Recep dug further into the Investment Trends knowledge bank he offered some other reasons commonly cited as driving the set up of an SMSF:

- The ability to choose specific shares
- An opportunity to save money on fees and
- Disgruntlement with current super funds.

Who are they?
The much desired SMSF trustee is, according to Wealth Insights many years of research, still "rich old (er) men". While the trustees are typically pretty evenly split between the genders Recep suggested the decision makers are far more likely to be male.

Where is the money coming from?
Traditionally, SMSFs were set up as a result of retail super fund members making the big switch. Increasingly however the funds flow into the sector is coming from industry funds.

Some 25% of last year's inflows came from industry super. Overall we're seeing a massive outflow from APRA-regulated super funds into SMSFs. While more than half of those SMSF start-ups are still instigated by financial advisers, that's on the decline.

Media and word of mouth are playing a far greater role.

What happens next?
Although accountants are still typically the instigators of SMSF set up, there is an increasing cohort of self-directed investors setting up their own SMSF, and running solo making best use of the lower cost, technologically-enabled platforms now available.

And the next wave of SMSF trustees are anything but "pale, male & stale". They're younger, less likely to seek advice and more likely to want to invest in property.

Investment Trends suggest:
- 18% of adults with super wants to set up an SMSF in the future
- 2% of super members plan to do so in the next 12 months
- They're still driven to have more control, and equally disgruntled with returns
- But a third also want access to property

This next generation of SMSF trustees are younger - in their 20s and 30s - and represent the next wave.

With SPAA's Andrea Slattery reminding us that 50% of the national retirement savings sit in SMSFs, and bullish growth predictions, we're going to have to have to get pretty good at talking to them.

Understanding the demographic and their drives is a good starting point.

I'm attending the FSC Conference with Aideen McDonald (@BlueChip_Comm) and Bruce Madden (@madd_23n) on behalf of BlueChip. You can follow my commentary at @carden and www.cardencalder.com
Posted by Unknown at 4:03 PM No comments:

The main news, to my mind, from the morning sessions of Day 2 of the Financial Services Council's 2013 conference (#FSC13) happened off stage.

And that news was the joint announcement by the Industry Super Network (@IndustrySuper) and the Financial Services Council (@FinServCouncil) that they will work, collaboratively, on a better future for superannuation in Australia.

Now I could permit cynicism to kick in at this news, but the fact remains: this is a "maturity milestone" for Australia's retirement savings system.

Warring parties, fundamentally trying to achieve the same thing, albeit with different philosophical bents, have come together in the name of a greater good: a decent retirement, characterised by the greater choices and standard of living you can only get from having enough money.

I particularly liked these two quotes, from David Whitely and John Brogden respectively:

"Industry Super Network and the Financial Services Counsil should lead the elevation of superannuation out of the political discourse and ensure policy making is considered, sector neutral and even handed."

"Because we have allowed ourselves to be divided, the significance of the industry and our prominence in the minds of government and consumers has been diminished. Ultimately, it is superannuation that suffer."

The full release is available on both the FSC and ISN websites.

Perhaps it's time for both sides to read it, and bury the hatchet - for the sake of a better future.

I'm attending the FSC Conference with Aideen McDonald (@BlueChip_Comm) and Bruce Madden (@madd_23n) on behalf of BlueChip. You can follow my commentary at @carden and www.cardencalder.com.
Posted by Unknown at 12:09 PM No comments: 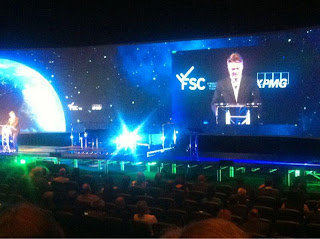 There was a sense of homecoming on Day 1 of the 2013 Financial Services Council conference (#FSC13 @finservcouncil).

@bowenchris was warmly welcomed back by a generally supportive crowd, in his new role as Federal Treasurer.

Aboriginal dancers welcomed delegates in a moving display of traditional dancing and fire-starting.

The regulators (@ASIC_Connect and APRA) shared their thoughts from the couch in the annual fireside chat, ably facilitated by the FSC's Martin Codina.

And delegates obediently queued, school excursion-like, for the bus trip to an offsite venue for pre-dinner drinks prior to the traditional Day 1 private dinners.

Brisbane may be a one-time home of mine - but the homecoming vibe wasn't about the many former Queenslanders flying in. Or even about the many industry veterans reconnecting for the annual conference. It was about an industry settling in itself after several years of intense regulatory reform, post-GFC turmoil and the resultant upheaval.

Change really now is a constant. But the sense now is that with both sides of Government committing to stability in super we may in fact get what we are promised - predictability.

You can find a link to the official media coverage here, courtesy of the good folk at Financial Standard.