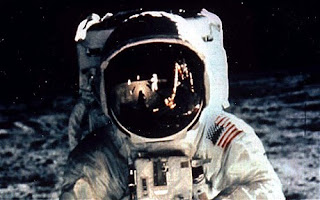 Is this the face of leadership?

It might depend on who else was around at the time. Because leadership is situational, and generally means being out in front: listening to the group but not necessarily acting in complete accord with group thinking.

What I do know for sure is that at the annual ASFA conference in Brisbane this week there have been strong, recurring themes about leadership from very different people: an astronaut, a movie star, an academic advising the White House, a futurist and the founder of an NGO.

Buzz Aldrin, Kevin Spacey and Cass Sunstein (all U.S. based) and Australian-based Chris Riddell and Peter Baines can’t all be wrong.

If they were in a group, making a decision about what leadership was, then yes, they might actually arrive at an agreed position or set of leadership themes. And they’d more likely be wrong than if they individually arrived at their position. That would be even more the case given none are women. That’s not personal opinion, it’s the academic’s assessment.

Surely disparate, but cleverer-than-average, types would be expected to arrive at more accurate conclusions about leadership as a group than they would have individually?

Not so, says Sunstein. Why? Because groups are stupid. Well they’re stupider than the intelligence of the individuals in the group apparently. Many of us might already think that in our darker moments. But do we actually use that thinking?

Which brings me to leadership. By definition, it doesn’t involve following. And being out front can be deeply uncomfortable. Lonely. Disliked. Mocked.

At the same time? Pioneering. Making the world a better place. Challenging.

These are just a few of the very clear common themes from extraordinarily different people. Leaders in their fields, each had clear views, and some great quotable quotes, on leadership.

Courage is in making the hard decision then living with the outcome. Which child to save? Does it get harder? ‪@peter_baines ‪#ASFA2015

Why did Hands Across the Water work? Because we decided to focus on the results, not the excuses ‪@peter_baines ‪#ASFA2015 ‪#leadership

Leadership is what you do, not your title. Move w speed. Change = upsetting people ‪‪@peter_baines ‪#ASFA2015

Can we take ppl 2 future & show them impact of their decns? Change behaviour? Yes I think we can ‪@KevinSpacey ‪#behaviouralfinance ‪#ASFA2015

Give ppl what they want, when they want it, in the form they want at a reasonable price ‪@KevinSpacey ‪#ASFA2015

The industry previously known as superannuation. If Prince can do it, so can we ‪#ASFA2015 ‪@chrisriddell

Those who are able to adapt to change will b architects of yr future. Those who don’t? Robots are coming for you @ ‪#ASFA2015 ‪@chrisriddell

Kennedy had the vision, courage, determination to do it. And gave us no way out ‪@TheRealBuzz  ‪#ASFA2015

So were Buzz, Kevin, Cass, Chris and Peter in a green room getting their groupthink on pre-conference? No. They spoke on different days, and one appeared as a hologram. Seriously.

So no green room.

You can thus afford to listen when they tell us, separately, that leadership in any realm of life doesn’t involve making popular choices or getting agreement before taking a decision and moving forward. It  does mean listening – staying silent in fact is best – then making your own call. Making hard choices and living with the consequences. Then moving forward.

So it’s onwards and upwards – even into orbit! ­– to our dear clients and friends in the superannuation industry.